We're trying to use DateTimePicker, I suppose it's the same for DatePicker too.

The controls never get disposed/destroyed properly, preventing the garbage collector from cleaning up.

In general we see memory leaks as huge problems and we do try our best to minimize such issues. In the given setup I do not think there is a memory leak and I will explain below why I think that.

We have internal tests and a built in MemoryTracker to help us identify memory issues. We also use the VS profiler to look for such things. With both of these I am unable to find a problem in neither our internal ui-tests, nor in the application that Yana sent to you (BlankApp1).

I think that what is going on is that you conduct the test too quickly and the runtime doesn't find a convenient enough time to properly run the GC and release the resources.

What I mean with the previous sentence is this - if you take a snapshot too quickly after navigating back from the PopupPage, then the runtime might not have released resources that would otherwise be released. I did see that in my tests, actually. One of the times, I rushed the test, and indeed, the Snapshot contained instances that should not be alive. However, with a consequent Snapshot, the instances were garbage-collected.

So what I can suggest for you is to try the BlankApp1_Modified, and let some time pass before taking a snapshot. What I did was to open few popups, and then navigate a couple of times back-and-forth to the PopupPage and not-open the picker's popup. Then I waited some seconds, then Forced collection via the profiler, and then took a snapshot. With that test, no instances were left alive.

For even a more thorough test I used WeakReferences. I am sending a modified version of the BlankApp1, where I added some things in the PopupPage.

I save a weak reference for each RadDateTimePicker created. I also used implicit styles and a custom Helper class to track SpinnerItemView instances. I used the SpinnerItemView as I can see them left alive in the snapshots you provided, and because the spinner-item-view is an element that is somewhere deep inside the Popup. So, if this element is released, then all the Popup and all of its content is released.

So, I modified the example to print in the Output window, if and how many instances are left alive. I am also attaching a snapshot with my measurements, for your reference.

In this test (dtp_output.png) I did the following - navigated the PopupPage four times without opening the popup, then 1 time I opened the popup, and repeated that sequence two more times. During this, I was keeping an eye in the output and saw that every time the popup opened, about 18 new instances of SpinnerItemView were created. The last time I navigated to the PopupPage, the output displayed that there were no alive instances left of either the RadDateTimePicker, or the SpinnerItemView. But the time before that - there were instances that were not yet garbage collected. So as I mentioned, this is only because the runtime did not find the time to release the instances right away, but it eventually did.

I did a similar test with the VS profiler, with similar results, but I decided not to send more snapshots and explanations as this post is already getting very large and complicated.

In conclusion, with both of the WeakReference-test and vs-profiler-test in mind, I did not find anything suspicious in the date time picker. All instances were eventually collected. This is why I say with confidence that there is no memory leak in the BlankApp1 and its modification.

Again, I will suggest for you to test the modified version, and do both tests, as I did. One test with the WeakReferences and the output window, and another test with the vs-profiler. If you see some instances alive, just give it a little more time, navigate once or twice to the PopupPage without openinng the popup, and this should give the runtime enough opportunity to release all instances.

Also keep in mind that every time the popup gets opened, about 17-18 new instances are created of the SpinnerItemView. So if these instances were leaking, after a few popups being opened, the number of alive SpinnerItemViews would accumulate to hundreds, and not just 17-18.

Please conduct the tests as I suggested and let us know if you observe the same results on your side, or if you get different measurements. As I mentioned earlier, we don't like having any memory issues, and I might have missed something, and we will be happy if you help us identify something I was not able to.

Thank you for your help and understanding.

I have tried your example, and I'm not sure what to think...

These are a bunch of snapshots I have taken to test your sample app. It was first pre-warmed a couple of times (popup opened, datepicker popup opened, closed, etc), and then I have started to take snapshots. 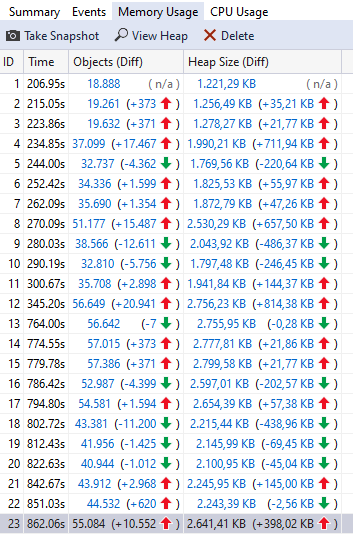 There's a lot of stuff when snapshot 23 is compared to snapshot 1... Here's what I found under Telerik.*:

As you can see, many of them are +2 or +4, which isn't a lot compared to many, many times the datepicker has been opened and closed (sadly, I haven't tracked the exact count)... Some changes, however, stand out a lot:

Have a look at this: 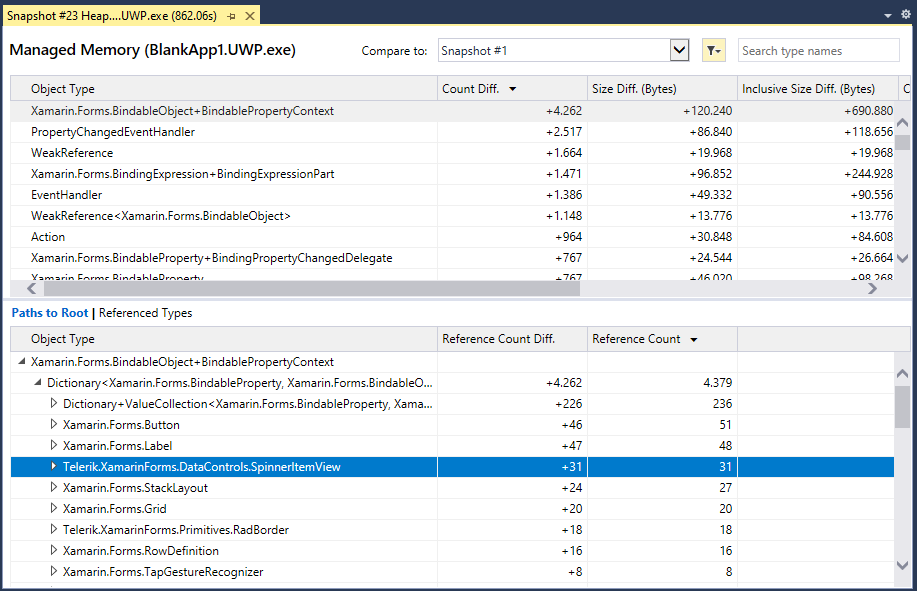 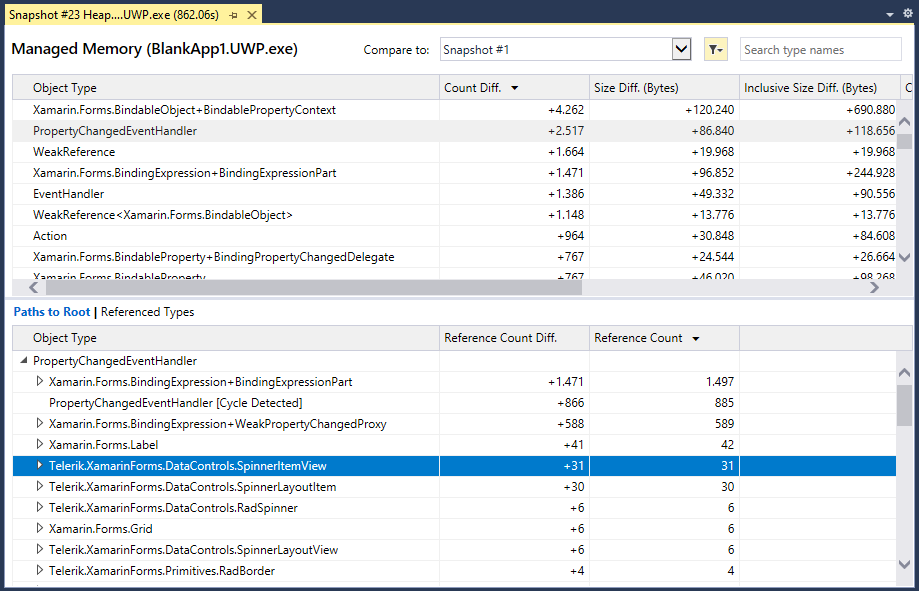 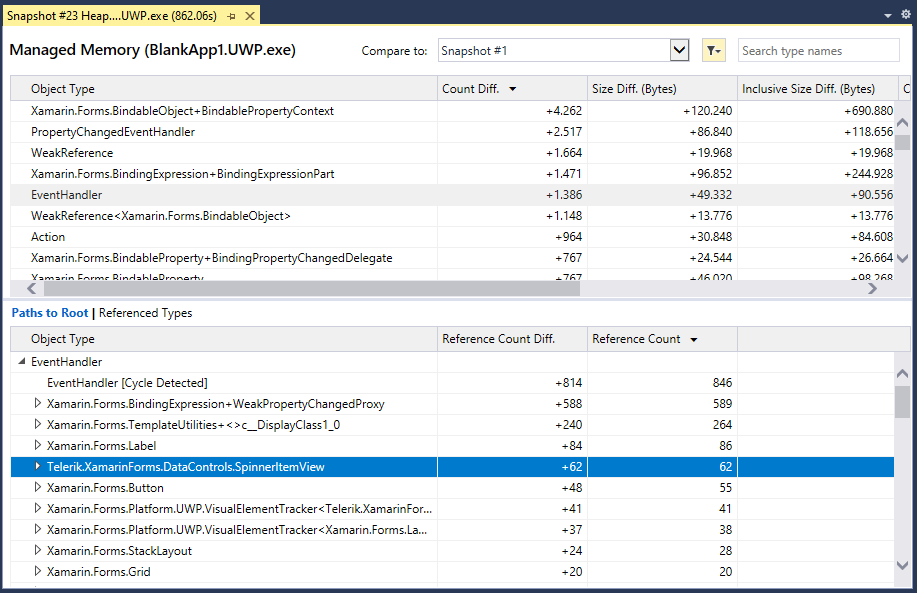 Don't know why the button and the grid are here, but it doesn't matter much. Nothing belonging to Telerik is in the list, which again means that simply having the DatePicker in the XAML is fine and won't cause any leaks; opening the spinner popup creates bad things that won't get disposed down the line. It's exactly the same as in our app.

If you look again at the comment I posted on Jan 22nd that includes just 3 times I opened and closed the spinner popup, something immediately stands out:

Maybe those are not the source of the leak, just a consequence, I don't know, but something is definitely still leaking. Maybe have a look at the spinner control?

Thank you for describing in details the case you have.  I have tried to recreate the scenario in a simpler Prism project, still, I am missing a few bits (how the view model of the popup page is connected to the main page).  I have attached my test app, would it be possible for you to download it and modify it, so that it resembles as much as possible the real setup you have? We would need to have the exact scenario, so we can investigate the reported issue.

One more request - would it be possible for you to test whether there is still a leak if you build the solution in Release build configuration?

Thank you for your cooperation on this.

In this scenario we're using Prism with Rg.Plugins.Popup, and the datepickers (two) are shown in a modal dialog: 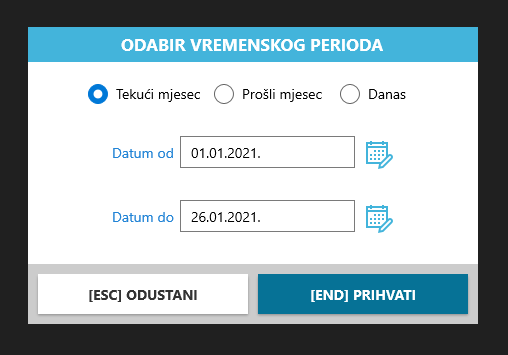 Closing the dialog (that's basically what you suggested, to navigate away) creates no leaks whatsoever:

The changes are simple weak references that will get collected:

The entries you see on the app screen snippet above are MaskedInputs and they are interconnected with DateTimePickers (through ApplyMaskFinished and SelectionChanged), so to exclude problems being having something to do with that and the controls' events, I have removed all codebehind and simplified the DateTimePickers' XAML to the following, as simple as it can get: 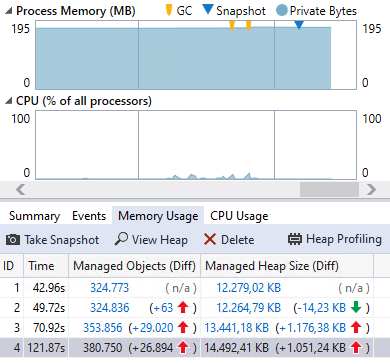 As previously, slightly fewer objects in the second dismissal, but still huge.

GC is being called on modal dialog dismissal already, as can be seen by the two orange triangles on Process Memory.

Thank you for sending the details.

I would need more information on how you've tested this, I am asking as if you just open/close the popup, it's expected some objects to stay longer. Can you try after showing/closing the popup to navigate to a different page, so that the current page is disposed, and then check the result?

Another test you can try is to add a button and manually call  GC.Collect(); on the button click event - after that check whether any popup-related objects stay in memory.

I look forward to your reply.

We have tried R1 2021 and the control is still leaking.

The presence of the Date(Time)Picker in XAML is okay, but showing and closing the popup with the spinners creates a leak.

Snapshot comparison of the last one (7) to the first one (1) lists the following changes under the Telerik namespace:

There are multiple objects whose count doesn't change, but memory usage does; it would be too much to paste all of that here and it's possible that GC would clear things eventually (not sure of that). Some examples, though:

I understand, I am sorry to hear the workaround did not help. We will investigate the issue in details and hopefully will be able to provide a solution soon.

We already programmed a method that traverses controls recursively and cleans up whatever it can (clears behaviors, binding contexts, gestures, calls Dispose if IDisposable, removes children, sets everything to null…) but unfortunately it doesn't help here :(

Probably there's an event handler internally left on your end and there's no way to remove it ourselves.

We take this issue very seriously as it concerns memory usage and we're definitely planning to look into it with priority.  We're going to update the feedback item here as soon as we have any new information on the matter.

In the meantime, as a temporary workaround, you can try to manually remove the DateTimePicker control from the visual tree when navigating away from the page.

I am so sorry for the caused inconvenience.

Are there any news regarding the leak?

In our scenario, we're seeing over 20.000 objects leaked for a couple of opened datepickers. Considering our app starts with 250.000 objects, and it's fairly complex at start with lots and lots of visual elements, this is quite bad.

Indeed, there is an issue related to disposing the DataTimePicker instance - I confirm this is a bug on our side.  I've updated the status of this item to "Unplanned", and hopefully we'll be able to provide a solution soon.

I've updated your points as a small sign of gratitude for reporting the issue to us. I am sorry for the caused inconvenience.