Currently a single instance of the WPF Report Viewer will often use multiple different HttpClient instances to talk to the Report Server.  This means that cookies added as part of earlier requests may not be sent in later requests.  If the Report Server is behind a load balancer that uses cookies to implement 'sticky sessions', this loose behavior with cookies will cause requests to get routed to different servers which is not ideal.  It is possible to use a storage mechanism on the server that natively supports a web farm (such as the Redis storage option) but that can be tricky to set up.

Instead, if the report viewer were to re-use the same HttpClient instance for all requests (including initial render request, export requests, print requests, etc.), the load balancer could work to route all requests to the same web server and then any storage mechanism (such as the simple File storage option) would work.

This issue was reported back in 2017 and I'm running into the problem again in 2022.  See: https://www.telerik.com/forums/wpf-reportviewer-cookie-behavior

What's the long-term plan for supporting Linux and Telerik Reporting? The dotnet design team is looking to remove support for System.Drawing.Common on Linux platforms. They're recommending compiler warnings in .Net 6, and full PlatformNotSupportedExceptions in .Net7

We are using Telerik reporting R2.2022 version in our project. Some of our reports have html link (created with tag “a”). If we preview those reports html link doesn’t act as an actual hyperlink, so it’s not clickable. We know that there is a HtmlTextBox limitation not to be interactive in WinUI report viewer. But this is important for us to be able to click on html link on WinUI and we need that functionality.

I tested WinUI example project (CSharp.WinUIExample.VS2022.sln) and opened SwissQRBill.trdp report. The report has some links to the external source in internet, which is not clickable, but if you open it in Standalone report designer it’s clickable. 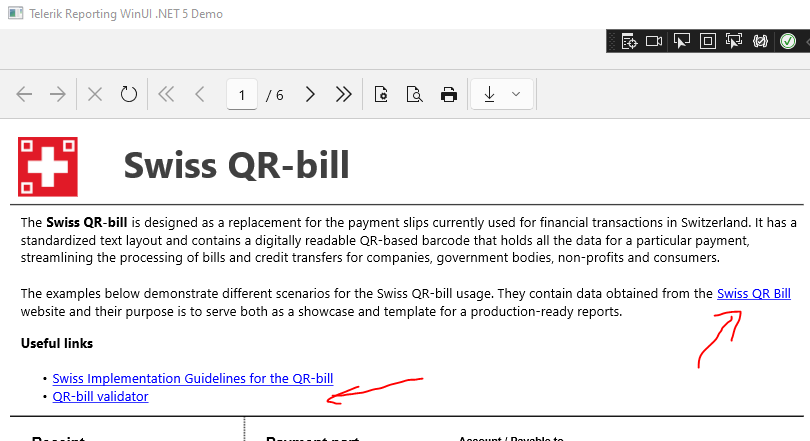 Is it on your roadmap to implement that feature?

Currently, the WinUI ReportViewer has a hard dependency on Windows due to the fact that the internals rely on the Win32 print dialog.

This means I cannot define the ReportViewer in a WinUI class library to be shared with multiple front-end WinUI projects. If you attempt to do this, there's an internal crash because the project cannot resolve  System.Windows.Forms.

This feature request is ask if you can replace the Win32 print dialog with the WinRT printing API.

At the moment it's only possible to have your reports in old-fashioned projects.

It should be possible to add/design reports to SDK-style projects. That should work no matter what target framework is (.NET Core, .NET Standard or .NET Framework).

As explained in this support ticket (https://www.telerik.com/forums/specify-default-print-settings---number-of-copies), our customers want to be able to set the default value of the number of copies for a report since they require multiple copies for their business processes.

Would it be possible to enable setting the default values for the printing when a report is generated? 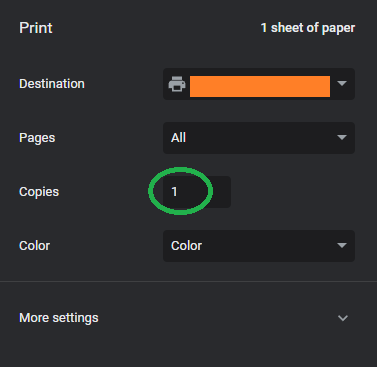 New development is being done with net core 3.1 and netstandard 2.1 and we can no longer create reports in the Report Designer using the ObjectDataSource.

Seems like it's time to update the standalone Report Designer for these new standards.

Problem description:
On ".net Framework" it is a supported scenario that assemblies with datasources and/or functions are loaded into the standalone ReportDesigner. This assemblies are used while designing and later also in the ReportViewer while executing the report. Feature described here https://docs.telerik.com/reporting/standalone-report-designer-extending-configuration

Now that .net 6 is release by MS the same feature is needed there. The problem is that the "standalone ReportDesigner" is targeting ."net framework" which means it can only load assemblies targeting ".net framework" or up to ".net standard 2.0". But that is not sufficient because on ".net standard 2.0" only EntityFrameworkCore3.1 is supported and all newer version (EF Core 6.0) are not.  See here https://docs.telerik.com/reporting/knowledge-base/use-reporting-in-dotnetcore-with-entity-framework-core

So in summary:
It`s not possible to use EF Core 6.0 (and upwards) DataSources in the given "standalone ReportDesigner" because it is targeting .net framework. It`s critical to be able to use the newest EF Core versions as DataSource to not be blocked from upgrading a ".net framework" application to .net 6 where the described feature/scenario is used. I need to use the "standalone ReportDesigner" because it gets shipped with the application to edit the reports individually by the enduser. The "VS ReportDesinger" is going to get the upgrade but this would only be usable as a developer before shipping the application.

Make the Design-Time parameter values of the WebServiceDataSource editable through code.

Currently, the design-time values can be edited only by the report designers or by saving the report with the TRDX extension and editing the XML.

In the XML, to change the design-time values, you may edit the ParameterValues property which is a string.

When exporting to PDF from Telerik Report Designer the software creates a list of flat links for each TOC entry, but the links are separated in the structure from the TOC Label. While a good start, it would be better to use a main TOC tag under which each line in the TOC would receive a TOCI (Table of Contents Item) tag. Each TOCI would contain the label and link for the respective item. Attaching a few examples to assist.