Once the request is implemented, we should have something like this:

In some scenarios, it will be useful to have the option to programmatically display the "new event" form or be able to load the data of specific existing event into the editing form

Currently, the Native Scheduler component doesn't provide the option to group its date by date.

This option is available in the Kendo UI for jQuery and it will be really nice if we have it also in the Native Vue Scheduler.

Currently, the Chip component provides the option to add an image to it by using a CSS class whose background-color property has a value of the image we want to be displayed in the Chip.

While the above works in a scenario with a smaller number of Chips, where the values of the Chips are pre-defined, this approach can't be used when we have dynamic data that holds different URL links. To be able to pass an image URL to the Chip component one of the following can be implemented:

With the current implementation of the Native Grid, if one needs to set a minimum width to a column that needs to add the implementation suggested in this Setting a Minimum Column Width example.

While the approach in the above example works as expected, the logic that needs to be added can be internal for the Grid component. Thus the users will have to add a simple column property like the below and no other configuration should be set.

In the jQuery version of the Grid, the columnMenu can be configured to show/hide the different column menu options.

Here is an example of how the sortable prop can be configured in a way the sorting options will be hidden in the column menu.

Currently, the value of the TimePicker component can be changed by updating the values of the lists in the popup of the component and then pressing the "Set" button inside it.

Can you provide the option to configure the component to automatically updates its value when a value in the lists inside the popup is changed? With this option, the functionality of the "Set" button won't be needed.

The native Grid allows you to lock selected columns inside it. When we have locked columns, these are constantly visible inside the Grid, while the unlocked columns can be horizontally scrolled to see their content.

The width of the area in which the unlocked columns can be scrolled depends on a combination of the following:

Having the above, there are some scenarios in which the area where the unlocked columns are displayed can be covered by locked columns or its size can become so small that the Grid data cannot be read.

Some examples of how the area that displays the unlocked column can become invisible or minified in size are:

The column menu in the  Wrapper Grid has the functionality to lock/unlock a selected column.

Can you add this feature to the Native Grid?

Currently, the Native Grid Columns have the minResizableWidth property available in the API,

Can you provide a maxResizableWidth property that will do the same thing for the Grid's width but will limit its maximum width?

I'm trying to figure out how to persist and restore state in the native Vue grid.  Am I missing something; is this not available yet?

I found the article about doing it with the grid wrappers, but not native.

When using the chrome accessibility panel to inspect the filter operator button, there is no accessible name or title (hovering over the button does not give a tooltip with the name of the button).

The clear filter button does have an accessible name and title.

I am looking for a loading spinner solution to use with Vue Native Grid. I could not find something on the docs.

I am not using data source from Kendo, just basic method to populate `:data-items="items"`

The thing that can be currently customized in the grouping toolbar of the Native Grid is only its text.

Please provide an option by which we can define a custom template for the grouping toolbar.

We've been using the Telerik UI for ASP.NET AJAX Scheduler for years.  It has this nice reminder dialog that can be checked on this link and the below screenshot. 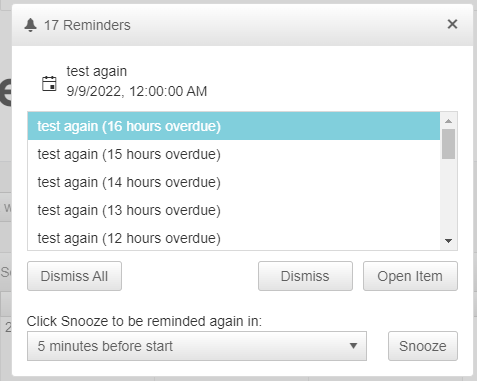 Can you add the Reminder functionality in the Native Scheduler component?

The current request is about an option that allows the developer to set the position of the Floating label above the Input, no matter if there is or isn't a value in the component.

Currently, this functionality can be achieved using the following CSS. However, it will be easier if we can control the label position with a single prop