The purpose of this control is to notify the user of unread messages, missed calls, etc. The image below demonstrates possible visualization: the notification section in the upper right corner. 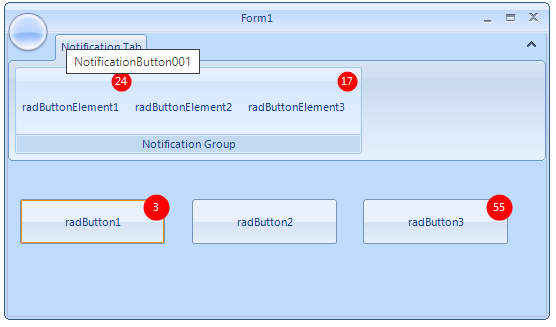 I really liked this feature and noticed you implemented it for WinForms already: TextBox Improvements in Telerik UI for WinForms

Would be great to have it for WPF as well!

Add a control that allows you to define a number of steps. Each step should be displayed with some kind of visual (like an ellipse for example) and each visual should be connected with a line. The line could be animated to look like a progress bar.

This kind of visualization is found in the Multi-Step Form feature of Kendo UI for Angular.

In the meantime, you can achieve this effect by implementing a custom control as shown in the First Look demo of RadButtons.

When we add a new child element to the RadDiagram(see attach file), the diagram automatically optimizes their layout. After the chart is updated, the new element and its parent are automatically moved to the left side. How to make them stay in their places?

There is a small discussion of this problem on the forum.

At this time, Telerik UI for WPF distributes libraries build for each TFM -> WPF45, NetCore and NET50.

If there was a way that UI for WPF could compile some of those libraries .NET Standard 2.0 compatible, it would allow for the developers making the transition from .NET Framework to .NET Core/.NET5 a but easier because they will be able to share the reusable Telerik code in a class library consumed by both WPF45 and WFP50 projects

I would request a new control. The RadButtonTextBox like the one in WinForms.

For fields with for example phonenumbers or emails we could then add a Button for launching the SIP oder Emailclient.

The possibilities are endless. Look at the "TextBox" in your browser window ;)

Newly introduced control RadCardView which allows you to display data in a card-like layout where you can sort, group, filter, and edit each card. More information about itl can be found here: https://docs.telerik.com/devtools/wpf/controls/radcardview/overview.

If there is a control, it should also display the SVG contents.
Unplanned
Last Updated: 23 Oct 2020 09:38 by Arsen

Dennis Callahan from Telerik submitting this on behalf of Don -

If your team could create a theme for UI for WPF that mimicked the look of a UWP application and responded to the Windows 10 Light and Dark setting that would be excellent. I have not found such a theme in any of the products I have looked at so if Telerik could do it I think it might be the first.