I want to capture the traffic from Android Phone, and already install Root Certificate as 'System Trusted Credintials' in /system/etc/security/cacerts (renamed like '269953fb.0' by md5).

Accessing the https page, It seems to behave well in a normal application and other browser (like XBrowser, a tiny volume browser, only 1.01MB) ,and which proves that the certificate is installed correctly, but in Chrome it prompts 'NET:ERR_CERT_AUTHORITY_INVALID'. As shown, it seems that Chrome does not associate the web certificate returned by Fiddler with the root certificate already installed on the system, but I use the same installation method in Charles, it behaves well and can browse https pages normally, it seems that Charles generates a different certificate than Fiddler? I used the command

Since more and more websites enforce you to use tls 1.2 (and don't support tls 1.0 any more), I suggest that the list of protocols is automatically extended with tls1.2 by a next fiddler update - or at least there should be a single-time question box with Yes-No-Cancel to extend it.

I have followed this https://www.telerik.com/blogs/how-to-capture-ios-traffic-with-fiddler blog post for configuration.

This way, IntelliSense could be used, both, with ScriptEditor and with any of the Visual Studio products.

That would require Telerik to derive their public classes, like Session, from an interface, like ISession. That interface would need to be stored in a separate assembly that would be published then along with Fiddler.
Pending Review
Last Updated: 18 Apr 2020 20:14 by Hello

I would be nice if Fiddler could decrypt zstandard compressed requests.

Examples
mobile request is post only with curent time in body, but i need to post this request with past time.
Backend is accept body with past requests
I dont have access to DB to change time, and no requests to change time. Also app is works only with current request (i can't use composer to create another request)
Pending Review
Last Updated: 02 Mar 2020 07:06 by ADMIN

and make me feel bad about telerik.

fiddler was much beter before telerik bought it.

It's a common practice to compress binary payloads inside WebSockets using zlib.deflate, though in Fiddler they are displayed as binary dump. It's quite simple to analyze two trailing bytes of a binary packet, and if they are equal to 0xFFFF you could try to apply zlib.inflate to that packet. If it succeeds, replace the binary contents with its unzipped text equivalent.

It'd be extremely useful if Fiddler could have the ability to do filtering non-destructively, where filtering doesn't drop data/entries/lines altogether, but rather, merely hiding them from display.

This enables the ability for you to do multiple levels/layers/slices of filtering, as there's very often a need for doing on any given capture session. Currently, however, when you filter on something, the capture data gets dropped from the data/result set, lost altogether.

Process Monitor by Microsoft/Sysinternals has this ability, and it's extremely useful, allowing you to not only do layers of filtering, but also allowing the ability to traverse back up the "stack" 1..n filter layers, and if/when needed, able to un-filter all the way back up to baseline of all capture data shown (and without having to re-load a session save).

Procmon also has the ability to "Drop filtered events", which when enabled does destructive filtering, dropping any non-filter-matching packets from that point forward: 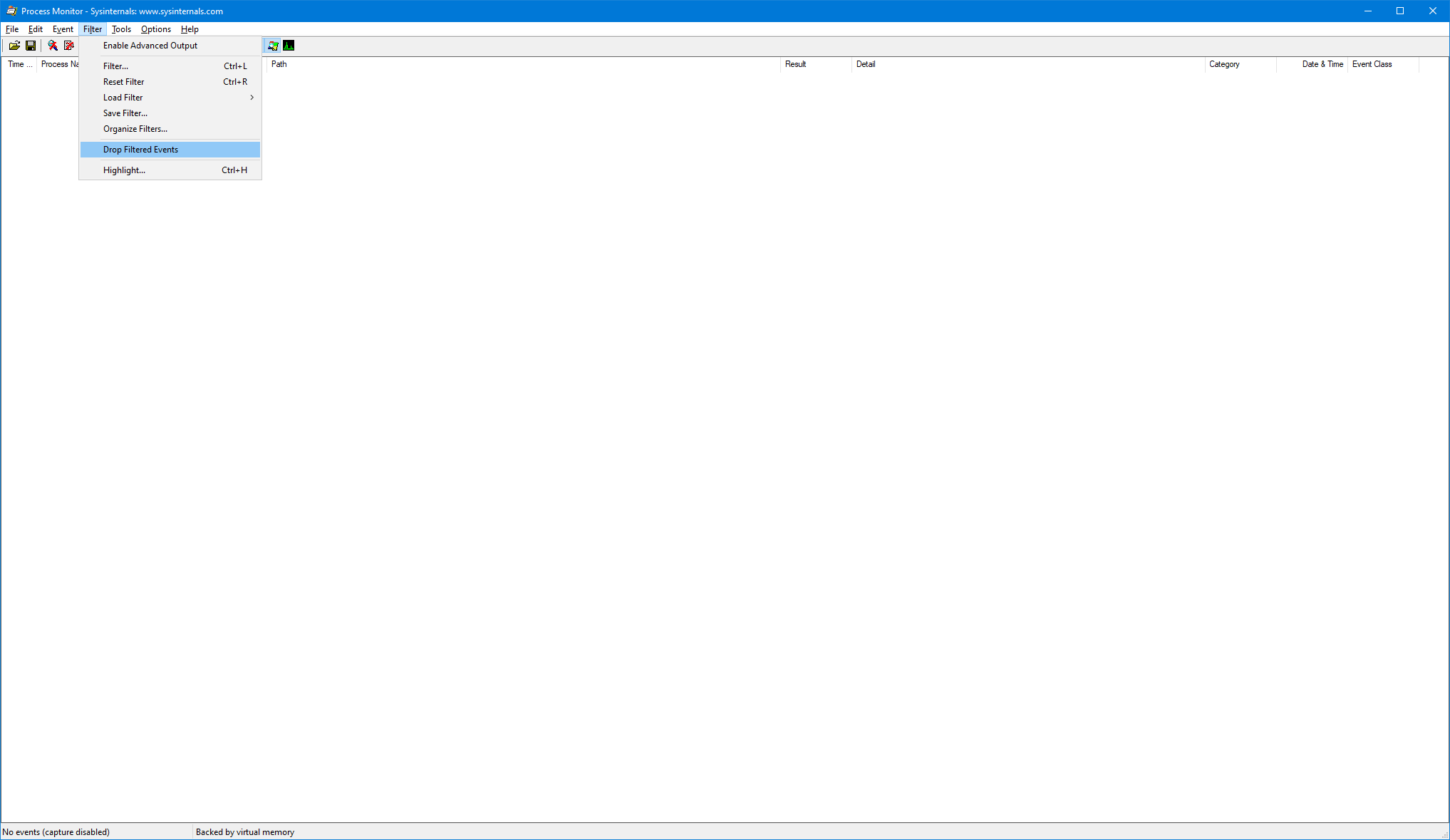 This would also be handy to have, but not crucial; much more beneficial/important is the ability to filter non-destructively.

Viewing and editing query parameters is not a pleasant experience.

I'd prefer not having to switch to Postman for editing and sending requests, but its UI is currently so much better for this task. 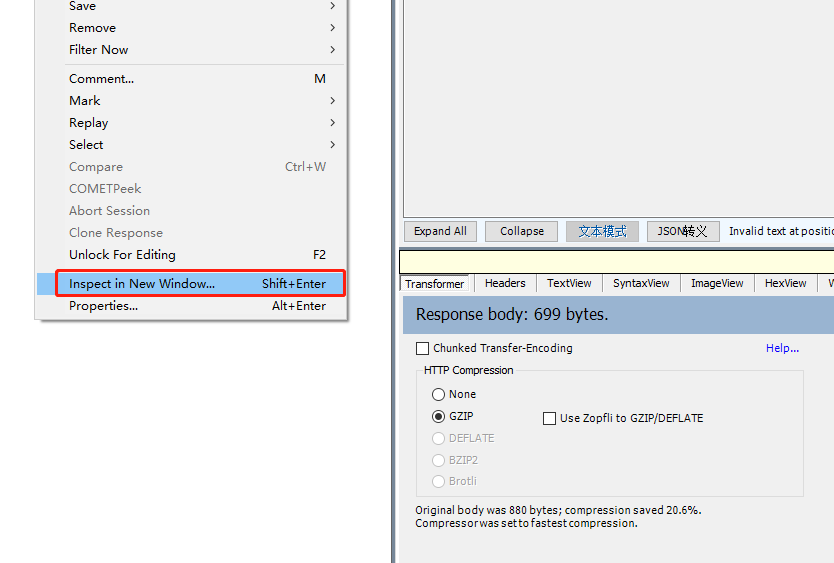 I didn't find the corresponding call method in the fiddlecore document. 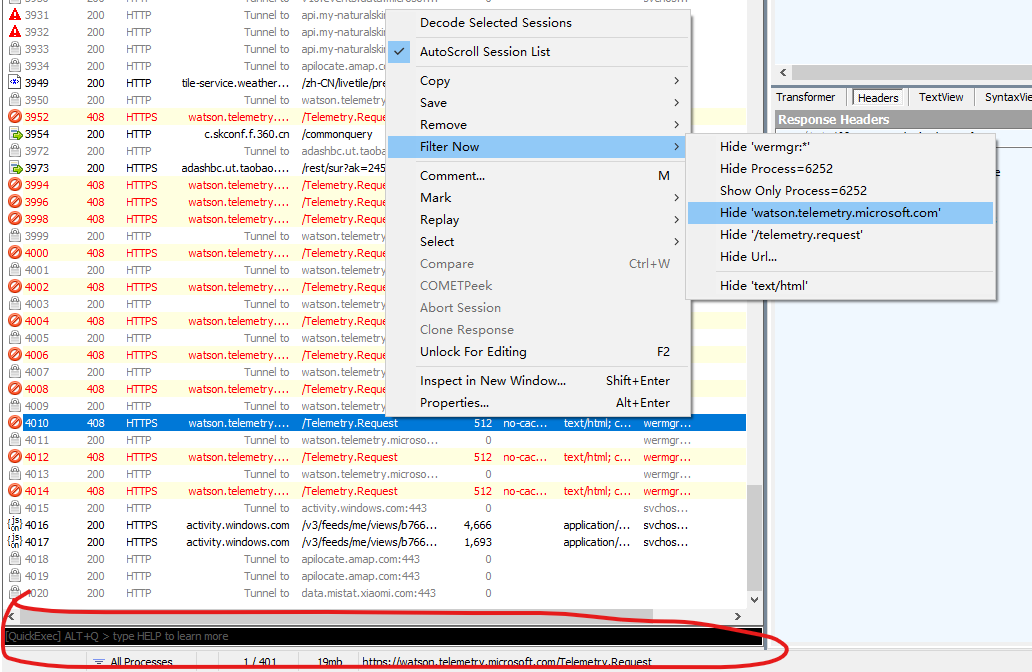 (Some blocking rules are not shown)

When I use the "filter now" function, it does not filter properly.

Prior to this, I used the "Filters" feature, but there was always a link that was not blocked.(this url: https://watson.telemetry.microsoft.com/Telemetry.Request  )

With the "Filters" function turned on, I used the "Filter now" function several times to block this link, but the result was only blocked at that time, and then came out again.

Now I turn off the "Filters" function, and then use "Filter now" to block that link. As a result, the blocking rule is not displayed in the lower left corner. Other blocking rules can be displayed normally.

Using latest Chrome as browser. Running fine for many months until 1 November 2019, Boom! Can anyone tell me what is going on? It appears to be random.

It would be really great to be able to view requests and responses as a formatted json string.  Currently, you can show JSON, which uses some tree format, and you can show raw, which is just a flat hard to use string.

It would also be great to be able to format json inside the request composer so it can be easy to modify.

Fiddler does not set up it's proxy server for the websocket protocol.  Applications looking at the global proxy settings are told by WebRequest.DefaultWebProxy.IsBypassed(Uri) that no proxy server should be used for the specified wss Uri.

1. Have a .NET application that uses websockets and checks WebRequest.DefaultWebProxy.IsBypassed(Uri) to see if a proxy should be used for a wss Uri.

2. Try to use Fiddler to observe websocket traffic

After turning on fiddler, enable "Use the same proxy server for all protocols" in the Internet Options / Advanced Proxy settings screen.

A simple change request: when I navigate, using Fiddler, to a page that has an untrusted https certificate, I get the popup from Fiddler warning me of the same. I want to get this popup, I don't want to disable it. However, when I click "Yes" on the popup, the main Fiddler window is brought into front, on top of my browser. My environment has a lot of self signed certificates in use on non-production systems, so this is happening quite often.

Thanks a lot for your great work on the program.

Fiddler is great but the composer tab really needs some love. For example, it could do with text manipulation features from other applications - double click selects a chunk of text, but it doesn't appear to be aware of common symbols like : ? # " ' ; etc, instead it highlights up to the next space. If i were to do this in vs code or notepad++ it would be more intelligent about delimiters and highlight the portion before the : or inside the " ".

Pressing tab inside the editors moves to the next editor - this seems counter intuitive in this context as you'd expect the editor to insert a tab rather than move you to another field.

I've been using fiddler for years and this has always bugged me. I normally edit the request in another application and paste it in, but it'd be great if i could do some basic editing in fiddler itself. It shouldn't be full ide-mode, but a little bit of help would be appreciated.

Simple things that would make this much better: