I am using KendoReact Draggable and Droppable and we find a bug when using it. This bug even happen in the official demo.

The bug is described below:

When a droppable area is rendered out of the originall window size, the droppable cannot detect the onDragEnter() & onDropLeave(), of course onDrop neither.

it seems that kendo did not handle when user scroll while dragging the draggables, so that when the draggables was dragged to a zone out of the original window size, it failed to detect it.(Figure4)

I have also found another bug which is when you drag the draggables and scroll, the draggable will somehow detacted with the cursor, but I somehow already fixed it. Maybe it gives some hint for you to fix this bug, maybe.

The Build Dates & Run Dates range picker both don't highlight the currently selected date does not outline the current date, as it does without contrast. Occurs in both Aquatic (High Contrast Black) and Desert (High Contrast White) modes.

Expected Result:
The current selected date should be highlighted, and today's date should be outlined.
User Impact:
If any image, icon, hyperlink, text or visual focus disappear when high contrast mode is enabled, will make the UI confusing and difficult for users with low vision to navigate easily to the desired element.
Need More Info
Last Updated: 29 Aug 2022 10:12 by ADMIN

Actual Result:Select element does not have an accessible name.

Expected Result:
All components need an accessible name, ideally using semantic elements and attributes. In rare cases, aria-label or aria-labelled by may be needed to alter the name. 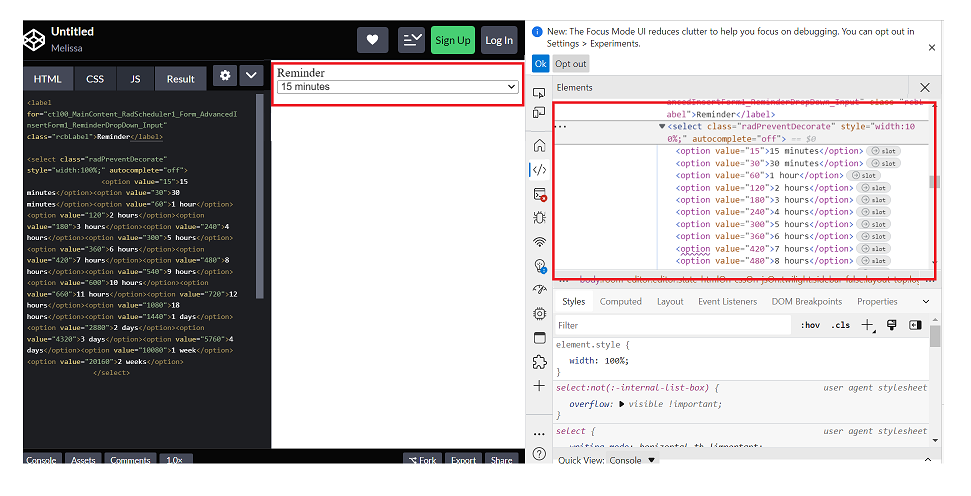 7. Observe an issue that Incorrect role 'link' is defined on button controls.

In this case, the expected role is {button}. All components need a proper role attribute, ideally with semantics. In rare cases a role attribute should be added to give full context and information to assistive technology. Learn more by reading about when to use an aria role and the html/aria role mappings.

After applying filter or page number, the table content gets changed but the screen reader didn't inform about the same.

After performing below action's, the table content gets changed but the narrator didn't announce about the content change:

Expected Result:
The narrator should announce about change in the data table as soon as the filter applied, or page get changed.

Users who rely on screen readers are getting confused if the focus lands on the icon and only announces link without announcing the name of the link.
Need More Info
Last Updated: 14 Aug 2022 12:00 by ADMIN

6. Observe an issue that 'Month' control on 'Calendar' popup is not accessible using keyboard.

'Click to book' and header controls are not accessible using keyboard.

'Month' Control on 'Calendar' popup is not accessible using keyboard.

Control(s) must be accessible to Bluetooth keyboards and other assistive technology. Common causes of this problem include a) the element does not have a proper role assigned, b) the element needs tab-index="0" attribute to be focusable, or c) the component is not registering key presses.

When I launch the app as usual:

Then the browser page includes this error:

The solution that works for me...

Edit `src/App.js` and add this line:

When I launch the app as usual:

Then the browser page includes this error:


The solution that works for me...

Edit `src/App.js` and add this line:

I noticed in the PDF Export component limitations (https://www.telerik.com/kendo-react-ui/components/drawing/limitations-browser-support/) that it does not support iFrames. This is a major issue for us as we have data containing full HTML markup and <style> tags, which we want to embed in a PDF. We need to use an iFrame otherwise the styles will bleed into the rest of the document. Is there any plans to support iFrames in the future?