When a Telerik UI Window is draggable and has its Position set, the first time the widget can be dragged, or it is being dispositioned while dragging.

3. Open and drag the window.

The window should be smoothly draggable.

The Drawer, when in overlay mode, adds a k-drawer-content class to the first element of the passed content, but does not wrap the content in a container element, leading to incorrect rendering.

The passed content should be wrapped in a container

When we use filter in the dropdownlist the WAVE is complaining of the missing Label inside the list box (for the search box). Please advise for the fix.

Below is the code, when add the attribute of Filter then WAVE complains about that as shown below screen shot from Telerik Demo site 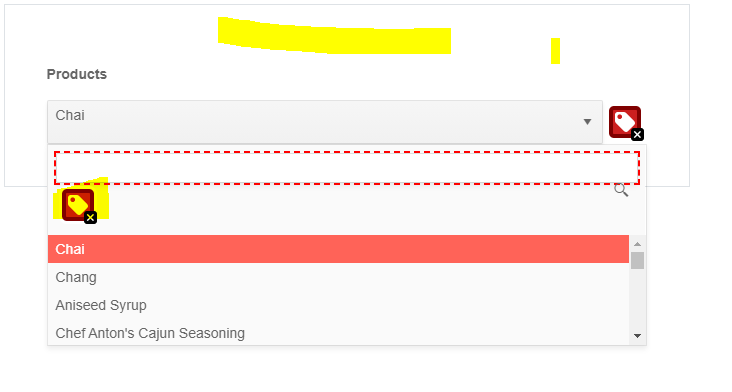 The Kendo UI Grid's pager for UI for ASP.NET Core does not have an "All" option and it can't be configured in the Razor syntax.

Using the Kendo UI Grid's pageable.PageSizes, the ALL option is not available for UI for ASP.NET Core as it's only an Int32[].

The All option should be included like in the UI for ASP.NET MVC Razor Syntax.

Currently, to set a field's label and text the Wizard's Label() and Title() options must be used:

It would be helpful if the Wizard can be configured to get these from the data annotation attributes in the model:

Reproduction of the problem
Run the following Dojo:

Select a range and check the browser console.

Expected/desired behavior
Close shall be reflected in the close event handler.

Currently, the ExportAs configuration exposes Proxy method to setup the proxyUrl field, but it is limited to enter only action and controller. Whereas in RazorPages a URL with handler should be defined instead.

Plus, in order for the AntiForgeryToken to work properly it should be injected in the form submitted by the tool.

Changes to the Window's content aren't applied by the refresh method, if the content isn't set up previously upon initialization or with the setOptions method.

The refresh method should correctly update the default content of the Window.

When PanelBar is configured with tag helpers selected="true" is not applied and the item is not rendered as selected.

The 'Item 1' is not marked as selected.

The item should be marked as selected when the PanelBar widget is loaded.

An empty request is sent, fetching all data.

A request should not be sent.

I think the new-event dialog is slow to open, when there are hundreds of events, because a placeholder event is added to the calendar before the dialog is shown. This causes re-rendering of all events, adding a noticeable delay.

Navigate to the scheduler page

Using any overload of ToDataSourceResult(Async) with a DataSourceRequest containing filter descriptors on an IQueryable provided by Entity Framework core 2.x, causes Entity Framework's "Query cache" to fill up for different filter values, leaking memory in the process. This is caused by using Expression.Constant in the generated expression trees for a DataSourceRequest's FilterDescriptors. Refer to https://github.com/dotnet/efcore/issues/14859 for more details about why this leaks memory.

Since Entity Framework's cache is always missed for new filter values, performance is also degraded due to this issue.

The issue is not present when using Entity Framework core 3 or greater. Apparently using Expression.Constant is not an issue on these version.

I have attached a minimal working example that illustrates the memory leak.

Could you please provide this feature as this is our business requirement.

The selection is moved 1h back to 1:00AM (or 1:30AM respectively) and the event is created at this time.

The event should be created at 3:00AM. This will be consistent with the way Outlook handles daylight saving - in a new meeting if you select 2:00AM as a start time, it is automatically changed to 3:00AM.

Implement Recurrence Rule Parser helper that uses the Scheduler recurrenceRule string and parses it in a usable format on the server.

There is already a similar helper for Telerik UI for ASP.NET Ajax.